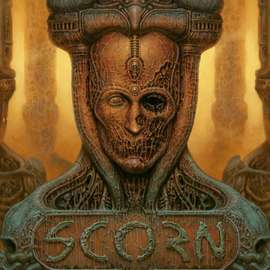 Welcome to atmospheric first-person horror adventure. Taking place in a nightmarish universe with strange forms and a somber background.

A veritable feast of options will be available for those who like playing horror video games in the following weeks, months, and years. A lengthy list of big forthcoming releases in the genre is scheduled for the not-so-distant future. One that many of us have been eagerly expecting for quite some time now is Ebb Software’s Scorn.

The game was publicized for the first time in 2014, and although it has been in production since then, it has been through some highs and lows. However, the game’s release is now on the horizon, and the anticipation continues to build. In light of this, in the following paragraphs, we will examine a few essential aspects of the game that you must be aware of.

Scorn’s striking visuals are frequently what initially impresses players. Since its debut, its dark, frightening, and dismal aesthetic has turned heads with its strange sights that make one’s stomach flip. Scorn’s creators at Ebb Software have said several times that the game’s appearance is influenced by H.R. Giger, the guy behind the Alien franchise’s renowned art design. Given how eerie it appears, it’s hardly surprising. Zdzislaw Beksiski wasn’t the only Polish artist that inspired the game.

Scorn’s story is purposely unclear and obscure, which is why it’s so compelling. You play as an unknown, unidentified humanoid. Something (with terrible, skinless limbs) stranded in a scary alien world where everyone and everything you encounter is a twisted and awful combination of machine, flesh, and bone. The game is challenging. As the game progresses, you’ll learn more about the planet, what you’re doing there, and your ultimate goal.

It is only fitting that how the tale is told in Scorn will be just as deliberatively obtuse as the story’s actual substance. The game’s narrative will be conveyed entirely without using cutscenes; instead, it will take place organically during gameplay. The game’s creators have prioritized using a narrative style as indirect as humanly feasible.

Even while combat isn’t the main focus of Scorn, you may still acquire weapons. We’ve only seen a few of them, but their weird visual design appears unique, like the rest of the game. The grenade launcher will be a late-game purchase, but the 6-shot pistol and 3-shot shotgun are great for close combat. They’re all in the game. Because they must be implanted to work, only one biomechanical weapon may be equipped. To swap, remove the one you have and insert the new one.

PLATFORMS, RELEASE DATE, AND OTHER INFORMATION

The release date for Scorn has been moved up to October 14, 2022, from the previous date of October 21. The game will now be available for download on personal computers (PCs) via Steam and the Epic Games Store, as well as for the Xbox Series X|S and on day one of the Xbox Game Pass service.